So it's no wonder that while there are vegan Republicans (Yes, really. Though in my experience they tend to be mainly fiscally conservative), we skew mostly progressively left leaning. And the last couple of years have been difficult political times for us American vegans. They also have the potential to become much worse.

It's exciting when a company decides to take a stand and put our country and our people before profits. No, I'm not talking about Nike. Instead I'm talking about Penzey's! While they are not a vegan company, the majority of their spices are of course vegan. And since the 2016 Presidential election, they have been very vocal about where they stand. They have supported the Affordable Care Act, been very clear on being against Nazis (why is this controversial again?), vocal supporters of diversity, and have done fundraisers for victims of Hurricane Harvey among other things. They also do lots of giveaways and theme spice mixes. And discounted boxed sets.

The best part is - their spices are terrific! I am in no way compensated for this endorsement (though I wouldn't turn down any herb blends they want to send me!). I just think we have to lift up and share companies that are speaking out and doing the right thing in this turbulent time. As you'll see from the pics, I'm doing my part to balance out at least one conservative that is boycotting Penzey's because of their liberal politics. Though how basic human rights became liberal I will never understand! 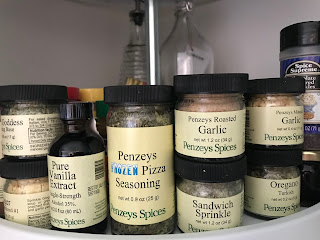 As I was getting ready to publish this post, I came across this article by Carol Adams and Virginia Messina on the The Anti-Trump Diet You Need Now. It has some great basic tips for surviving and thriving in this challenging time. Have you checked out their new book yet? It's called Protest Kitchen: Fight Injustice, Save the Planet, and Fuel Your Resistance One Meal at a Time. I think I need to get a copy! But then I am rather addicted to vegan cookbooks.

How are your taking care of yourself and staying strong in our current political climate? What companies do you think we should be supporting right now?